There are 4,762 AM radio stations in America, broadcasting between the frequency range of 540 kHz to 1700 kHz within the medium wave broadcast band using Amplitude Modulation. Amplitude Modulation is a simple process where the audio data is merged with a station's carrier frequency, resulting in mirrored upper and lower sidebands easily demodulated by a simple radio reciever, which uses a diode detector that removes or filters the carrier base tone and higher frequencies of the upper sideband, leaving you with the original audio waveform. 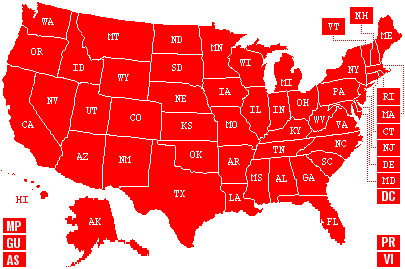 AM Radio Station reception is different in many areas based on the time of day, as the signal can be influenced by the reflection of the ionosphere. During the day there is little reflection, but at night, skywave propogation can carry a station's signal over a much further distance than the daytime's groundwave propogaion. Because of this incredible difference some stations are only permitted to broadcast between dawn and dusk, and others must drastically reduce the power of their signal to avoid interference with distant stations.

For many of you, that may mean you can not tune in an AM radio station that you usually enjoy during the night when searching for it when the sun is out. Luckily many stations also make their broadcasts available on the Internet, and we have indexed thousands of them in our database, allowing you to listen online.

How Amplitude Modulation (AM) Radio Works

Radio is all about sound, and sound is all about changes in the vibration (or oscillation) and pressure or force exerted on molecules in the air which can be converted by the human ear, by its impact on the physical movement of bones and hair inside them as electrical pulses that our brains are able to interpret as changes in what we call pitch.

Recording devices such as a microphone work much like the human ear, and can sense the movement and force of air and convert that information into electrical energy with varying levels of alternating current and stored onto records, tapes, cds and other devices or can even be modified and sent back out into the air in the form of radio waves.

Speakers can do the reverse of what a microphone does. As electrical current is supplied to them, the diaghragm will vibrate and displace the air pressure around you, allowing your own ear to pick it up. This lets you to hear those original sounds which were previously recorded or transmitted over the air to your radio receiver.

It wasn't until the late 1800's that a man named Heinrich Hertz figured out and proved the ability to pass positive and negative electrons to leap across the air using magnets, or what we call electromagnetic radiation. These waves of electrons move at consistent speeds which we call frequency. It is of little suprsise that the rate of the frequency or speed of these waves per second are measured in "Hertz". In order for a radio receiver to capture these particlular waves, it needs to know what level of Hertz or Frequency to lock onto.

The human ear is only capable of capturing, receiving an interpreting the movement of air particles up to a certain pitch. These audible frequencies are within the range of about 16 Hertz to 20,000 Hertz (20 kHz), although higher ranged frequencies up to 48 kHz often improve the quality of what we hear. If all audio signals were broadcasted within this range however, the level of noise would be so great it would be impossible to make any sense out of it out. For radio to work, there would have to be a way to manipulate the frequency of the audio wave above what we normally have the ability to hear when we send it out, and then reduce it back down when played on our radio speakers to a range we could listen to.

In order to accomplish this, all the waves and pitches of audible frequencies would need to be changed to a higher range, or amplified. The question now becomes, how could that be done, how much amplification should take place, and how would we be able to do this for more than one station?

One set of answers to these questions make up what we know today as Amplitude Modulation or AM radio. Amplitude is the measurement of change in the strength of a frequency, while modulation is the process of altering the properties of a waveform. The first thing we have to decide to do is how much we will raise the level of audible sound into inaudible waves. The range or spectrum of frequencies where we can place AM signals was decided to be restricted to 540 kHz and 1700 kHz. This spectrum was divided into 10 kHz wide channels meaning a maximum of that number of various pitches could be broadcasted onto those stations. In order for this to work we would have to limit or filter the audible sound down to only 5 kHz, which is why the quality of AM radio does not sound nearly good as what you could hear if you were at the studio yourself or if you were listening to wider radio bands like FM or listening to the output of a CD player.

This 5 kHz wide audio is converted into electromagnetic energy and amplified by what we call the carrier wave of the station's channel. The carrier wave is the midpoint of the channel's frequency range and what stations are assigned to use. For instance, an AM radio station licensed by the FCC to use 540 kHz is actually given a range between 535 kHz and 545 kHz, the center frequency being the carrier wave and giving the channel what we call 5 kHz side bands. Each frequency variation within the 0-5 kHz range makes up what we call a sine wave. Using a DC powered oscillator, all the frequencies in the waveform are increased, sped up and there by amplified by adding the rate of the carrier frequency to it, producing a new wave form. As with all electronic signals, there is both positive and negative signals, and these are identical 5 kHz levels above and below the carrier frequency (making up the full 10 kHz allotted to the channel).

An AM radio receiver's antenna, even more powerful than the human ear can receive a massive amount of frequencies coming from thousands of miles in any direction. In order to deliver the range of sound coming from a particular AM station, it uses what is known as a resonator, which is made up of a capacitor and an inductor. The inductor which is a coil or wire temporarily stores the current flowing through it as a magnetic field. A tuning knob eiether adjusts a variable capacitor or adjusts the length of wire of the coil, which changes the rates, speeds or frequencies of electromagnetic energy flowing through it and kept constant by the continuous positive and negative discharge of the capacitor, thus filtering out all other frequencies ranges and sending only the AM channel's spectrum to a demodulator.

The demodulator undoes the amplitude modulation that was performed back at the AM radio station's studio. A diode only permits the positive pulses above the carrier frequency to pass through leaving behind the original 5 kHz of audio which can now be sent to your radio's speakers, and emit vibrations of particles in the air your ears can interpret.